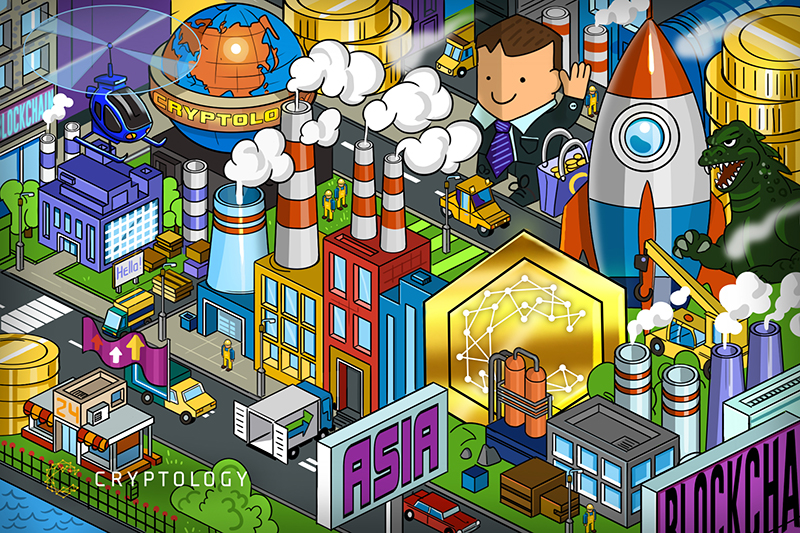 What exactly is blockchain doing for Asia’s economies and why is it regarded widely with much optimism and scrutiny similarly?

From governments reacting to financial regulation, the ongoing buzz around cryptocurrency, technology giants reconsidering their growth strategy to newly minted jobs created each day, blockchain has revolutionised Asia by storm.

Blockchain is poised to give global industries seated in Singapore a spring in its step, together with other Asian economies, to the next era of growth.  Many are eager to see blockchain technology taking on a transformative leap in Asia. These include global businesses placing emphasis on sophisticated data analytics and software, breakthroughs in AI and automation and industrial capabilities for digital factories, additive manufacturing and consumer-packaged Internet of Things.

In Singapore, where economic diversification is part of its DNA, there’s no resting on its laurels. In the hyperconnected economy, blockchain’s potential surpasses both ever-evolving cryptocurrencies or traditional auditing and accountancy functions.

Innovating across industries with speed and precision, is the exact complement to Singapore’s formula for a well-greased economy. That added to its capabilities of storing transactions efficiently and transparently under one belt and erasing the need for middlemen, makes it an enabler for growth.

“Blockchain technologies are being adopted by a wide range of industries across the Asia Pacific region,” said Simon Piff, Vice President, IDC Asia/Pacific (Singapore) to Unhashed. “While many of the use cases are coming from the financial services industry: in markets as diverse as Australia, Thailand, and Singapore, we are also seeing strong acceptance across the entire supply chain from food provenance to logistics.”

Here, we take a look at some of the industries that look set for innovative and distinctive growth with blockchain’s new placed positioning.

As one of the fastest innovating industries in the region, the FinTech space sees numerous advancements in areas such as payment apps and risk and compliance management.

According to The Asian Times, one of the segments expected to grow the quickest is cross-border payments.

Currently hampered by high transaction fees and imbalanced exchange rates, blockchain technology has the ability to process funds in seconds, compared to transactions which typically take days. A report by KMPG also argues for blockchain strengthening the security of online accounts. Through blockchains technology capabilities, fraudsters find it difficult to hack and penetrate the accounts.

Outlying areas of finance are also integrated with the use of blockchain. In China, the government is making charity donations more accountable with the reliance of blockchain while Singapore is heightening ease of its inter-bank payment processes through Project Ubin, a partnership between the Singapore Monetary Authority and R3.

The pilot project test substitutes digital tokens for every virtual Singaporean dollar. Change, described as “a multi-asset blockchain wallet” supports the trade of a expansive range of digital currencies. Its ease and benefit lies in allowing users to still continue making payments with traditional currencies.

Outside of Asia, San Francisco-based Ripple is also planning partnerships with banking partners in Japan, South Korea and India to enhance the speed and ease of cross-border payments.

As one of the industries that is brimming with innovation and most receptive to change, the online gaming sphere has long embraced digital currencies. In this space, technology brings about unforeseen ways of working and a multiplicity of new games in the market. Gaming applications are attuned to people paying with virtual currencies and some practicing the exchange of real-world fiat currencies with in-game money.

A notable player in the space is Neverdie, that has launched a cross-platform cryptocurrency that can comply with real-time transactions and secondary market cryptocurrency investments.

Games such as Beyond the Void and Spells of Genesis, also help educate users about the game asset economy as well as helps to broaden the potential of in-game assets and digital trading card games.

Bountie CEO, Lex Na, tells Tech in Asia that the versatility of cryptocurrency is its largest unforeseen potential. “I think that the interoperability, the value of allowing gamers to bring the online into the offline world, is taking cryptocurrencies and the blockchain mainstream,” he says.

Streak of success for Smart Cities

Dubai is one city that has taken the test bed onboard in a drive to make the blockchain platforms fully functioning. The United Arab Emirate business hub is looking to create more partnerships with start-ups and corporate entities that are looking to be part of its blockchain-backed development plans.

Transformation of the work landscape

Blockchain’s potential to make everyday work more transparent and productive is beginning to see recognition. This includes the legal and financial overview of employment contracts, the screening process of candidates to best practices for collaboration.

Deloitte, global tax consulting firm, in its 2017 Human Capital Survey argues the need for employees to improvise and adapt their work methods. This will allow them to meet the demands of global mobility. Companies of the future will achieve their optimal outcomes through the best use of innovative blockchain technology and “communication tools to promote engagement, collaboration and a global workforce infused with ‘digital DNA’.”

Property tech (or technology-eased real estate) puts a new lens on a space that involves tedious paperwork and a need for storing sensitive information such as prices and personal data. Through incorporating a time-stamp that cannot be reversed, this binds real estate smart contracts securely.

The media and entertainment sector is constantly evolving, with new technologies and game-changing solutions launched with each second. Forbes highlights the use of micropayments to alleviate issues relating to content consumption. Cryptocurrency also helps bring transaction costs down and allow a larger scale of sale for the creator.

Tech Crunch reports a partnership between Civil, a blockchain-based journalism organisation and Splice, a Singaporean technology and media startup, that is intended to seed some 100 new media projects in the next three years.

A report by JP Morgan also highlights some challenges of blockchain in the entertainment sector including integrating technology into the current processes. The technology that is used requires processes of building and testing for security will involve time and resources. The blockchain regulations remain inconsistent for the time being where more alignment is needed to create value through technology.