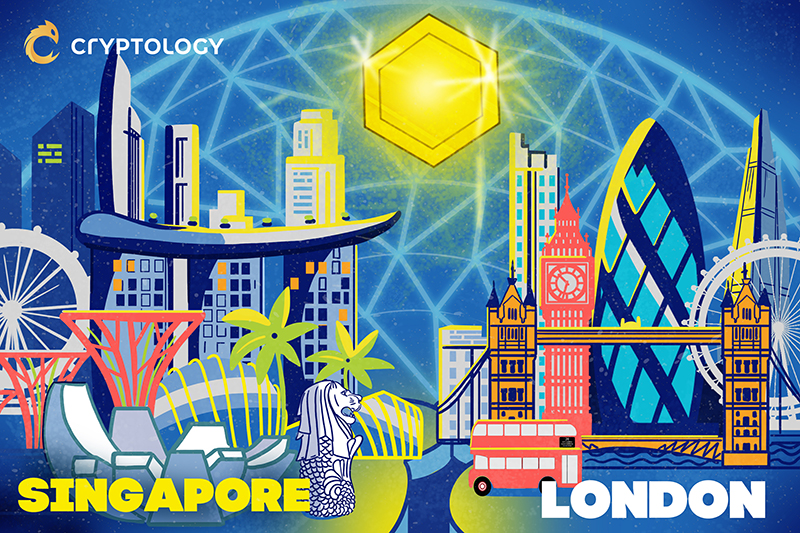 Singapore and London have been identified as international FinTech hubs according to reports by leading accounting bodies of Singapore and the UK. Long heralded as financial hubs for Europe and Asia respectively, London and Singapore were highlighted as having the integral elements — markets, talent, regulation, capital and government support — necessary to drive FinTech innovation out of a single location.

This begs the question, how do London and Singapore owning these qualities translate to them advancing their potential as blockchain and cryptocurrency hubs? What challenges remain in store and how will they evolve to stretch their existing capabilities?

According to some experts, crypto financial activity will start to be accepted by the mainstream financial sphere. Sean Kiernan, Chief Executive of DAG Global said, “The gap between the two worlds of traditional finance and crypto economy remains, but in the coming years we can expect this to lessen and eventually disappear.”

A Guardian report highlights the UK as having the requisite balance of industrial and government determination as well as technology resources to become an international leader in blockchain technology. “Blockchain has been recognised by the UK parliament as a very important and disruptive technology, and it has shown commitment to support the accelerated development of the digital economy via a variety of government initiatives,” said Brigitte Andersen, chief executive of the Big Innovation Centre.

The UK’s inclination towards blockchain use cases in FinTech is also a result of highly sought after levels of domain expertise. “With 115 companies that we know of there is a lot of diversity but we do see a lot of companies building products around settlement and clearing, insurance and financial trading. The high regulatory barrier of financial services means that domain expertise is very highly valued.  For that reason, we expect to see the UK to lead on FinTech and Insurance use cases, as talent, resource and funding are shared between startups and incumbents,” said Lawrence Lundy, Head of Research and Partnerships at Outlier Ventures.

Luc Gill, CEO for Pharmaco, a pharmaceutical distributor, and consultant for global blockchain initiatives, felt Singapore has the competitive advantage between the two when it comes to helming expansion plans for blockchain.

“Compared to London, Singapore has developed a more crypto-friendly environment. While blockchain technology is being extensively used in both markets, Singapore’s Monetary Authority is more geared towards nurturing blockchain projects and start-ups as well as facilitating skills development in these areas. Numerous bureaucracies and burdensome government procedures in the UK make Singapore more attractive as a viable global financial emerging blockchain centre.”

Nathan Livingstone, blockchain specialist for cloud technology and financial services, said, “When it comes to something as omnipresent as public blockchain, one of the prerequisites is multiple distinct parties who don’t necessarily have aligned incentives. When there is a central body keeping track of things, many of the benefits are minimised. Therefore, I see Singapore as being the more viable centre at the moment, as there is more opportunity across the emerging Asian markets. European bodies and regulators act as a parallel solution to blockchain.”

Knowledge as a tool for innovative collaboration

Knowledge-centred efforts, including R&D, are a useful tool for blockchain advancement in both Singapore and London. Apart from driving innovation, R&D opens doors for collaboration and sees ideas being scaled and getting to market promptly.

Gill said, “Emerging companies are given the opportunity to test their innovations and conduct research to enter the market in the most efficient way possible. The private sector ultimately rules this space in terms of capital investments and all governments could allocate more funding for innovation. The UK was one of the first to introduce a Fintech sandbox, and soon followed up by announcing partnerships with governments worldwide including the Monetary Authority of Singapore to create a Global Financial Innovation Network. I believe this is a great leap forward and this type of collaboration can greatly reduce the cost and time it takes to bring an innovation to market and see mass adoption that could have a global impact.”

Others feel government intervention is detrimental and argue for a more autonomous approach. Tomas Forgac, independent cryptocurrency author and advisor observes the more a government supports or runs anything related to blockchain, it takes away the original intent and decreases innovation.

Forgac said, “There are three things governments globally can do to help crypto in particular: Firstly, ensure cryptocurrency users are not subject to additional taxation burden due to exchange or capital gains. That includes not only monetary burden, but also additional bureaucracy. The next point is to clearly state, that commercial banks are under no additional risk for dealing with cryptocurrency companies or users. This is to ensure, that it is as easy for crypto companies as for any other business to open a bank account. Last but not least, ease up securities regulations or state, that they don’t apply to security tokens. This is to make sure companies creating tokenised organisations for which it is very easy to do regulatory arbitrage prefer to do it from the country.”

Close ties to China and Switzerland

With numerous countries hankering for a slice of the crypto pie, two emerge as sizeable contenders — China and Switzerland. However, they are not without their own challenges to navigate against.

Switzerland faces money laundering concerns and the reluctance from its Central Bank to allow crypto firms access to setting up a bank account while China’s cryptocurrency clamps see some firms there relocating to other crypto hubs. In China, domestic bitcoin-yuan trading is still frowned upon by authorities in Beijing.

Chinese mining company Bitmain shifted its regional headquarters to Singapore and has developed offices in Canada and Switzerland for mining operations. According to the Financial Times, a coalition of Chinese government agencies conveyed orders to authorities to request a closure of mining activity earlier this year.

Marc Bernegger, private consultant to Swiss economics minister, Johann Schneider-Ammann, told Business Insider that Switzerland has a natural inclination to be a crypto hub due to the neutral nation’s “ direct democratic system, which gives a lot of power to the people, so politicians and their parties have far less influence than in most other democratic countries.”

The UK and Singapore, as Europe and Asia’s respective financial hubs should optimise and maintain collaborations with Switzerland and China, to drive opportunities for blockchain expansion. Luc Gill said Singapore has the upper hand in terms of tax incentives as well as more established international partnerships, “Given the existing strong ties between China and Singapore today, it could be argued that collaboration in the space of FinTech and cryptocurrencies is already optimised. I believe Singapore is in a much stronger place to collaborate with China in comparison with the UK simply because in my last 15 years spent in Singapore, it became evident to me that Singapore-China relationships were developing in strength in other economic areas even then.”

Switzerland’s openness to foreign investment and separation from political matters also position it as a leading player. Gill commented, “Switzerland, on the other hand, has had a history of being more lax, open and politically neutral. Decisions made by businesses set up in Switzerland are never embroiled by international cat and mouse games played by governments slapping tariffs on each other. Even though the UK has the benefit of geographic proximity to Switzerland, given the online nature of cryptocurrencies, FinTech, and blockchain, Singapore could also have an advantage here given its stronger ties with industry giants by offering attractive tax incentives.”

Decentralisation is essential for a city to earn its repute as a sustainable global blockchain hub according to Nathan Livingstone, a blockchain specialist for cloud technology and financial services. Livingstone said, “In the blockchain space specifically, Singapore can act as a hub to SE Asia, which has a plethora of opportunities due to its decentralised nature. There are natural partnerships possible with China due to language, but it’s easy to overweight that factor. Events such as the Singapore FinTech Festival have really showcased Singapore’s commitment to FinTech, and Switzerland has a pavilion there. However, events like this need to be supplemented by policy around things like access to the banking system for crypto startups.”

For the UK, its incomparable advantage is in its diverse capital markets and the vigour of its education sector. Livingstone added, “The UK is the home of international capital markets, and processes the highest notional of derivative contracts in the world. That seems like a great place to start, but it has to be in collaboration with banking consortiums. The UK education system has always attracted foreign talent, and this seeds networks that can pay off in the future – for example, students who have returned home to China who have setup startups can look back to their university networks for partners.”