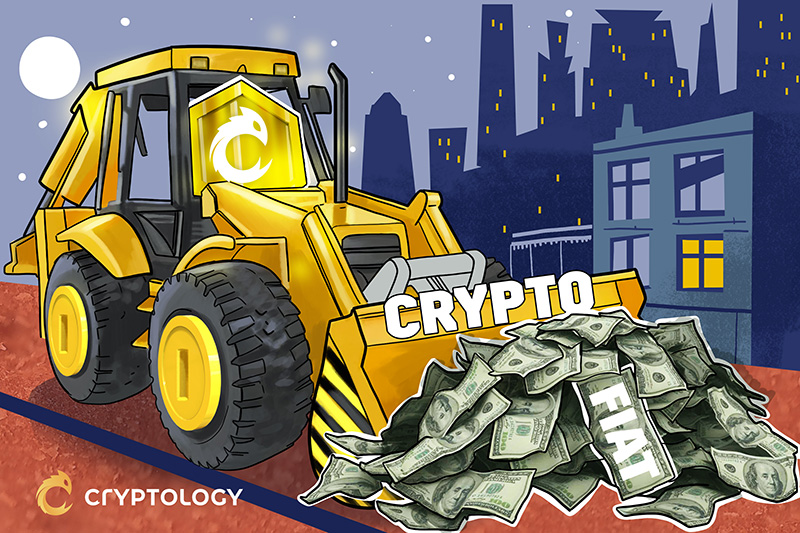 As founder of DataDash, cryptocurrency’s YouTube channel with the strongest following, Nicholas Merten is confident of cryptocurrency consuming fiat’s share of the pie and becoming a de facto currency. Merten predicts its evolution to continue with the “institutional speculation” phase from 2019-2020, and finally the “crypto replaces fiat” phase from 2020-2030.

According to a report from Futurism, there is a strong likelihood of a scenario where fiat is superseded by a more tenable and effective mode, cryptocurrency. One of the unique advantages of cryptocurrency is that it isn’t tied to any government or financial institution’s actions. In this context whether it’s radical fiscal or foreign policy shifts, currency devaluation or a kneejerk reaction to a crisis, cryptocurrency cannot be subjected to interest rates, exchange rates, or transaction charges, because of these events.

James Song, founder and CEO of blockchain startup Exsulcoin, tells Inverse that he sees two key issues pushing against mainstream adoption of bitcoin. The first is regulatory: “If we can all agree on what to do about cryptocurrencies, and have them recognised across jurisdictions, it can become like everyday usable money,” Song says.

Substantial obstacles such as regulatory challenges and scalability still hinder it from becoming a viable option. eToro managing director Iqbal Gandham tells Blokt that given the speed of adoption, he believes he could see Bitcoin and other cryptocurrencies on the high street within the decade. Gandham adds, “The evolution of currency signals new technology replacing old to improve the transfer of value from one person to another. Cryptocurrencies represent a next step on this journey.”

Blockchain-supported cryptocurrencies have a tendency to be more secure and technically safer than fiat currencies. They also have a capability to strengthen the process of ‘Universal Basic Income’, displacing the tedium of fiat’s inflationary adjustment and complications in money transfer. Cryptocurrency can also support another social welfare form referred to as ‘Negative Income Tax’. It is the system in which people earning below a certain amount receive unconditional pay from the government instead of paying personal income tax.

Some feel that the overall displacement of fiat by crypto remains unlikely as there are numerous hurdles ahead that prevent it from occuring.

Luc Gill, CEO of Pharmaco, the world’s first decentralised telemedical ecosystem, says, “Some countries are already moving towards putting their own fiat on the blockchain. This is, for instance, the case of Singapore with Project Ubin.

Nevertheless, we must keep in mind that the major players such as banks and other financial institutions have every incentive to try to keep fiat as it is today and bury cryptocurrencies. For that reason, there will certainly be a fight in the industry between the pro-cryptocurrencies and the actors who would prefer to maintain a highly centralised system, which is more easily manipulated. That being said we, may see mass adoption increase faster when FinTech innovations are applied in a new form of banking system which as of now is missing.”

Investors, in a murky and turbulent climate, may actually garner renewed interest at the prospect of crypto displacing fiat. Gill says, “Almost all forward-looking investors have more interest to gain from crypto replacing fiat. This migration would certainly take some time and would generate a lot of price volatility. Yet, it is when volatility is high that most investors and traders get the highest returns on their money.

Early adoption of bitcoin has made millionaires and even billionaires. With the recent interest of the world’s biggest financial institutions, it is clear that the price can only increase in the long term. This is a simple ‘supply vs demand’ scheme due to the finite number of bitcoins available and its growing popularity in the direction of mass adoption. The same cannot be said of the forex market.”

What do the experts make of cryptocurrency being a stop-gap solution should a global recession be amplified? Gill comments that a new value exchange could possibly hold weight and redefine exchanges. “A full-scale recession, if experienced by any of the major superpowers, will affect every other country in the world. If we veer away from bitcoin, we go back to the way things were. Recessionary economics creating a huge separation between the rich and the poor and a shrinking middle class. However it’s my personal belief that should bitcoin be adopted by the major nations as a global reserve currency, those recessionary scenarios can be contained with a new form of value exchange. Of course, nothing would work if suddenly bitcoin were legislated globally out of existence.”